[In October 2018, I posted the first of what I intended to be a series. As you can see, I'm good at starting projects, but not so good at continuing and completing them. Let's see how much I can get done in April. Not poems, but writing nonetheless.
I don’t know yet whether there will be as many as 50 objects or more than 50. We’ll how it develops. What I am aiming for is to describe the objects in my apartment and why I have kept them, what they mean to me, so that after I’m gone (which I don’t expect to be any time soon) my younger relatives won’t be able to say, “Why did she keep this old thing?” My mother said she would do that for her jewelry, but she never did.] 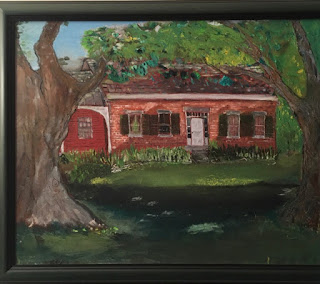 This painting and the photos are from Vermont. My Uncle Ben painted the house that he and my Aunt Nita bought in 1960, when he started teaching history at Goddard College. The house is in the village of Adamant, a few miles north of Montpelier, in the town of Calais (pronounced callous). Built around 1840, that same house is in the old photo (below), taken somewhere between 1890 and 1910, judging from the women’s clothing. Nita found it in the upstairs storage room, and she may have known the names of the people in it, but I don’t. 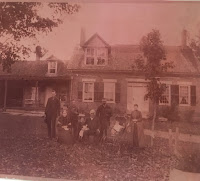 It’s actually a photo of a photo; I’m guessing the original was in poor shape, and Nita wanted to make sure she had a survivable version. The sapling next to the woman on the right is the big maple on the right edge of the painting. I wonder if the grandchild or great-grandchild of the baby in the carriage is the person who sold the house to Ben and Nita. 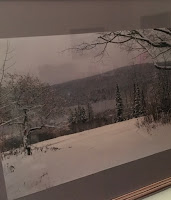 Between the trees and the house in the painting is a grassy drive, up a slight incline from the dirt road, nameless as far as I know. The snowy photo (left) was taken looking down that drive toward the road and the fields, a beaver pond, and hill beyond, in November 1995. I was housesitting, while Nita had gone to Paris to visit old friends and spend the pension money she had earned while working in Paris in the 1950s. (She had worked there for about six years and accumulated a small amount of pension, but she could only collect and spend it in France.) By this time, she and Ben had
been divorced for 10 or 12 years (a long, somewhat tawdry story for another time), but after long bargaining she got to keep the house, and as she was my mother’s sister, she’s the relative we kept in touch with. I was just a couple of years into writing the first draft of a novel (that still sits in very old Word files in my computer) and took the opportunity to turn feeding Nita’s cat into my own private writing retreat. 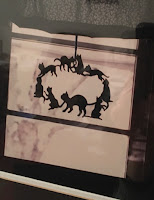 The final photo is from inside the kitchen (the room behind the porch to the left in the photo and painting). The dancing cats is an ironwork, probably made by someone Nita and Ben knew. And the tree outside beyond the window is the larger maple on the left side of the painting. (I've tried to avoid the reflections from the glazing on these last two photos, but not entirely successful, and that's why they are at an angle.)


Jack and I began visiting Ben and Nita for a week, or two or three, almost every summer from 1967 until 1997, when Nita died. (I’ve never been quite sure who or what I missed more, Aunt Nita or her house.) The house was sold to a friend and neighbor, whose son now lives there. For a time, after Nita was diagnosed with lung cancer, I thought of asking her to leave me the house, contemplating turning it into a writing retreat. The New England Culinary Institute was just down the road; perhaps they could provide meals. One of the upstairs bedrooms was big, with lots of light; perhaps it would suit a visual artist. But then I thought of how much rewiring would need to be done, for phones and for computers, as well as making Internet service available. I would either have to live there or be an absentee landlord, and neither choice was appealing.
My sister would have loved living in that house, but she never developed a relationship with Nita and Ben. That was partly because Ben intimidated her. He had written a rather unflattering portrait of her in his first book, Down and Out in Academia, and my parents never quite forgave him. At the time, I thought it was fairly accurate, and I must have already realized that writers use whatever is in front of them for whatever purpose they want. Your only defense, if you don’t like what they’ve written about you or yours, is to write your own version.
(To be continued)