My Life in 50 Objects: The Ring

The ring sat among other rings in a cotton-lined box on a crowded counter in the gift shop. The shop was just a couple of blocks from campus, near the corner of Xenia Avenue, the main street in Yellow Springs, set back from the sidewalk behind a zigzag paved path amid bushes and flowers. The door tinkled from an overhead bell when Connie and I entered.
Connie was my hallmate, another East Coaster, from Long Island, and it was just a few weeks after we’d arrived for our first year at Antioch College. On this warm day, we’d gone exploring, and here we were in an overstuffed gift shop, looking, just looking.
The shop had a mixture of goods: scarves, vases, rings, earrings, tea boxes. I gravitated toward a ring. It had a green stone, mottled like the surface of a brain, in a round silver setting surrounded by a moat lined with a faint braid, further surrounded by 16 silver knobs, and its silver band was incised by curlicues. I tried it on, and it fit. Then I asked how much it cost. 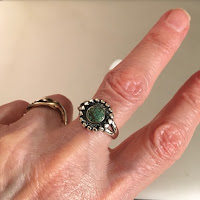 “Six dollars,” said the proprietor, a woman on the other side of middle-age with frizzy graying brown hair. Too much. (The equivalent of $51 today.) I put the ring back. That was too much. Connie came over and rummaged through the box of rings, while I wandered over to the tea table. There was a black and orange tin labeled Constant Comment, with orange rind and spices. That sounded tasty. I bought a tin. Back at our dorm, I noticed that Connie was wearing the ring I had tried on and wanted.
The next day I went back to the gift shop and looked for the ring. The one with curlicues on the band was gone, but there was another one, almost the same except the silver band was plain. I paid the six dollars—and I still wear the ring, almost 60 years later.