I’m 11. It’s a drizzly summer day in West Haven, Connecticut. The neighborhood kids are wondering what we can do on such a dreary day. A pile of logs in the field between Joanie and Karen’s old house and new house gives someone an idea. “Let’s build a cabin.”

Joanie picks up one end of a log and I pick up the other end. Immediately we are beset by a swarm of insects, biting insects, stinging insects.

“Run!” someone yells, and everyone else runs, while I’m trying to swat the stingers away, to scrape them off. There are too many, they just keep coming back for the attack. Finally, I run to the end of the field, and the dampness and air brushing my body as I run wipes the yellowjackets away. But stings are painful.

“Put mud on them,” I’m advised. “It will pull out the stinger.” So I slather mud over my painful arms and legs.

When I get home, my mother threatens to hose down my mud-caked body, but lets me take a shower instead. Four scar, one on each arm and leg, remain for decades. A dermatologist diagnoses the spots.

The Bag in the Closet

I keep things. Occasionally, they aren’t even my things. For many years, a small, duffel-like bag sat in the bottom of a closet in my apartment. The bag belonged to a college friend of my husband’s. Here’s how it got there.

This college friend, let’s call him J.C., visited us in New York soon after we got married, back in the mid-’60s. He and my husband told stories, talked about people they both knew; we drank a lot—this was before pot was a part of our life. My husband had told me J.C. was a charismatic figure, always a crowd of girls around him, always organizing parties.

I developed a crush on J.C. He was lean, dirty blond hair, blue eyes, just my type. (I should insert here that while I was newly married, we had only gotten married because my parents found out we were living together and made a fuss. We were relatively young, only 22, hadn’t dated much in high school or college, so we had both agreed that sexual fidelity wasn’t anything we particularly cared about. But neither of us had yet acted on this bohemian belief.) I flirted with J.C. while we sat in the living room, drinking and talking. Late into the night, my husband and I repaired to our bed alcove, while J.C. wrapped himself in his sleeping bag on the floor of the living room.

One night in bed, my husband asked, “What do you think of J.C.?”

“I have a real crush on him,” I admitted.

My husband said, “He told me he thinks you’re really hot. He wanted to know whether it was okay if he slept with you.”

I wasn’t sure how I felt about this. On the one hand, it was exciting that J.C. wanted me as much as I wanted him. On the other hand, I didn’t like the idea that he’d asked my husband for permission. I wasn’t a piece of property that J.C. could borrow for a night of fun.

I waited to see what would happen. Would J.C. make a move on me? What would I do if he did? He spent another week sleeping on our floor, then returned to Kansas. He never made a move. I was a little disappointed.

After he was gone, my husband asked if anything had happened between us. I said, no. He said he thought J.C. was more afraid of losing a place to stay for the night.

Some years passed. My husband and I moved to a bigger apartment and had a baby. A few months after the baby arrived, J.C. was in New York again, this time on his way to Europe for a year. There was some woman he knew, they were going to meet up in Venice—or something like that. He talked more than he had before, ideas more than stories about people they knew, something about “extended life.” I was less attracted than I had been.

This time he brought marijuana. We sat in the living room, smoking, he at one end of the couch, me with my babe in arms at the other. The dope infused a repulsion toward J.C. so powerful I had to leave the room.

My husband joined me in the baby’s room some minutes later. “What’s wrong?” he asked.

“He’s giving me a strong feeling of paranoia,” I said, and my words flowed into the air in balloonish letters, like cartoon dialogue. I admired them until they faded like the Cheshire Cat.

“Do you want me to tell him to leave?”

J.C. left the next day, but returned a few weeks later. Something had gone wrong, the woman wasn’t there. He was on his way back to Kansas. Could he leave this bag with us? He’d pick it up some other time. My husband put it in the closet in the baby’s room.

J.C. never came back for the bag. Every few years, he’d call my husband on the phone, each time talking more and more incessantly about his discoveries of life extension. After a while my husband heard that J.C. was haunting his congressman’s office, claiming either that others were stealing his ideas about life extension or the congressman himself had stolen the ideas. Then we stopped hearing from him.

About 30 years after the bag was left with us, I opened it. There was nothing inside. It was an awkward size, neither small enough for a carry-on, nor big enough for more than a weekend. It had a stiff top, like an old-fashioned carpetbag. My husband was happy to get rid of it.

Since the pandemic started and people have been staying at home, I’ve seen many articles about how to deal with the boredom.

I am not bored. I’m retired, but I do have about eight hours a week of free-lance work. The rest of the time, I have no problem dreaming up projects. For instance...

Cleaning out the bottom of one of my closets four months ago, I found a bag full of knitted squares, 36 different squares, already pinned together in groups of six and labeled rows 1-6. I had, who knows how many years ago, laid them all out and decided how they could be put together into an afghan. Then put them in a bag and forgot about them.

A couple of months ago, I decided it was time to finish this project. First, I stitched together each row, then put all the rows together. Finally, I saw it needs a border, so that is what I am working on now, 15 to 30 minutes a day, not quite every day. Once it’s done, I’ll decide what to do with it. 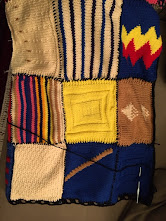