Last night and this morning, I promised myself I would make a plan and stick to it, not fritter the time away reading the newspaper and Facebook. The plan: get up, do the laundry, go to the gym, and see the movie “Neruda,” the subject for my next movie discussion group. But of course, it wasn’t that easy.
I did get up and took the laundry to the laundromat in the basement of my apartment building before eating breakfast. While everything was in the washers, I went back to my apartment and had breakfast, reading the paper until the clothes had to go into the dryer.
After bringing the dry laundry back home, I remembered that I also needed to make a phone call, to the management company for the co-op I live in, to get more details about removing my dead husband’s name from our shares in the co-op and adding my daughter’s name. (I’d meant to do that while the clothes were in the dryer, but forgetting that was the first false step.)

I dialed the number on my cellphone, and waited for the phone to begin to ring. And waited, and waited, and waited. Nothing. That’s strange, I thought. I dialed again – still nothing. I dialed my own number – still nothing. Panic.
My first thought was, here I’ve got my day planned out, and now my phone doesn’t work, and I’ve got to spend time I don’t have trying to find out what’s wrong. I almost fell apart. I tried texting to see if that worked, and it did. Tried the phone again, and still no success. More panic.
Then I remembered the time-honored tech fix, known in our house as “plug and unplug.” Actually, it’s turn the power off, let it rest a few minutes, turn the power back on. So I powered off the phone, folded up and put away all the clean laundry, and came back to the phone. Power on. Dial. Success.
By the time the call was completed, it was time for lunch. After lunch, there was time for the gym or the movie, but not both. Having missed the gym for a couple of weeks, I did the virtuous thing, and went to the gym.
The real lesson to remember: power off—rest—power on.
Posted by Red Emma at 1/17/2017 10:24:00 PM 3 comments:

Week 2 Essay: Masculinity in "Manchester by the Sea" and "Moonlight"


EDITED: This is just one small angle on these two movies, which have many nuances, especially Moonlight, that I’m not addressing. So please take it for what it is, and not what it isn’t.
Posted by Red Emma at 1/12/2017 10:10:00 PM No comments:

This is a day late, but I don’t want to wait until next Tuesday for this story.
I usually do the crossword puzzle in the New York Times on Monday, Tuesday, and Wednesday. Thursday it gets harder, also on Friday, and Saturday you have to think like Will Shortz, puzzle editor, to have even a chance.
So last Thursday, January 5, I was doing unusually well, I thought, even figuring out some answers by the letters that appeared in crossing words without having the foggiest idea how “?they related to the clues. “Versatile worker” was “of all trades”? “Putdown of an ignorant person” was “you don’t know”? I had the answers, but I didn’t know why.
A few days later a friend called to say she wondered if whoever made the puzzle had known Jack or that January 5 was the first anniversary of his death – obviously, those puzzle answers made sense because they were “missing Jack.”

Indeed. The puzzle creator’s name was unknown to me, but I didn’t know everyone Jack had known. So Monday I wrote a letter to the Times, laying out the facts, and asking whether the creator knew Jack or was this a cosmic coincidence?
On Tuesday I had an e-mail from the puzzle maker. No, he did not know Jack, and the puzzles are created months in advance. But he had his own “cosmic coincidence” to relate. His father had died just about a year ago, at home, and the puzzle maker found a bird’s feather on the floor by his father’s bed, with no idea how it got there. He picked it up and put it on his father’s coffin at the cemetery. About a week later, he found a nearly identical feather at his own home.
Posted by Red Emma at 1/11/2017 11:40:00 PM No comments: 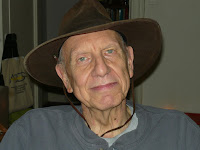 Jack Robbins's memorial is finally up on YouTube, a year to the day after he died. It's in seven sections, so you don't have to watch it all in one sitting -- one hour total. Here are the links, and who's speaking in each part.

Scheduled speakers
Part 1: Me and Christie.

Part 2: Both Jack's brother Jim, and his oldest friend, Martin Limbird, were unable to be in New York for the memorial, but they sent remarks read by Mark Jaffe (my brother) and Richard Haas (Christie's partner), respectively.

Speakers from among Jack's friends
Part 3: Mark Jaffe, Richard Haas, and Anne Newman. Anne is married to a college friend of Richard's and happened to work at Business Week with Jack before Jack met Richard.

Part 6: Erla Hutchinson Alexander and Sylvia Law. Erla was a friend from his college days at Wichita State University, and Sylvia was among our oldest friends, a classmate of mine from Antioch College.

Part 7: Cary Lacheen and Michael Coffey. Cary was one of Sylvia's students at NYU Law School and a movie fan to match Jack's passion. And Michael, my former boss at Publishers Weekly, had the most appropriate last word.
Posted by Red Emma at 1/05/2017 10:33:00 PM No comments: