Memorials are generally somber affairs, especially when the “departed” are close family or friends. But the one I went to yesterday was almost a party.
It helped that I did not know Jennifer, the young (48 years old) woman who had died. I was there with my cousin, who had driven up from Virginia, and she was a close friend of the woman’s mother, having met the daughter only once. But I know from my experience that it feels good to have a lot of people around as you commemorate or celebrate a life.
The memorial took place in the Palm House at the Brooklyn Botanical Garden, a light-filled space that felt very appropriate for the woman I heard described by her wife, sisters, college friends, and more recent friends. Under each of our chairs was a piece of colored paper and a Sharpie. At one point people were asked to write the word or phrase that best described their memory of Jennifer—and then to crumple up the paper and toss it to the person who was at the microphone, who then read each one. Not what you expect to do at a memorial.
When the reminiscences were over, we had delicious catered food—Mexican at one stand, Moroccan at the other—outside, serenaded by a small band. Unfortunately, the weather was not cooperating well; it was chilly, and while some people sat at the outdoor tables, others retreated back to the Palm House. 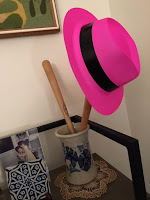 Later, children brought out boxes of party hats and glasses, like this pink one. And everything ended with the band leading a parade around the lotus ponds in front of the Palm House, and playing “When the Saints Go Marching In.”

A friend of mine who died a few years ago from kidney cancer had a party while she was still able to appreciate it and so she could be present when her friends celebrated her. Jennifer, who apparently loved parties, turned down that suggestion. But she wanted her family and friends to have that party, even if she wasn’t there. And it felt good to continue life for the rest of us.
And just to illustrate life and death going on all around us all the time, as my cousin and I were leaving the botanical garden, a heron swooped in, grabbed a goldfish from the lotus pond, and flew off with its dinner.
-------------------------------------
It’s Slice of Life Tuesday over at Two Writing Teachers. Check out this encouraging and enthusiastic writing community and their slices of life every Tuesday. And add one of your own.
Posted by Red Emma at 4/30/2019 05:20:00 PM 1 comment:

I’ve been to Paris only twice and never went inside Notre Dame. My last trip, in September 2016, I went to the Ile de France and to another church there, St. Chappelle, which is beautiful. But when I got to Notre Dame, there were long lines, and I can’t stand for long without sciatica pain. So I’ve missed all that was burned inside. 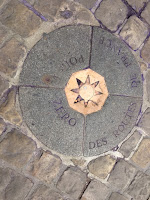 I did, however, get this photo of the “zero point” from which all distances from Paris are measured. It’s embedded in the flagstones in the large place in front of Notre Dame. Later that day I crossed one of the bridges from the ile to the mainland and saw hundreds of padlocks attached to the railing. “Locking our love” I was told they symbolized. Jack was the true romantic in our relationship, so in honor of him, I bought a padlock and attached it.

About 25 years ago I was in Budapest for a conference. One night I ate at Kispipa, a restaurant the was supposed to be Jewish haute cuisine. (This looks like a common restaurant name, with several still in Budapest, but I can’t tell whether any of them is the one I ate at.) I ordered roast goose, which came with deliciously “steamed cabbage” and something called “onion potatoes” (according to the menu). The goose, the first time I’d ever eaten it, had “the texture of juicy but very well done pot roast,” I wrote in my journal. The cabbage was less steamed, more braised for a very long time, possibly in some stock. I wrote then, “It still had an astringent bit, but it was mellow, not sharp like sauerkraut,” and it was perfect with the rich goose. The potatoes were roughly mashed, just as I make them at home, with tiny bits of onion. The whole meal was delicious. 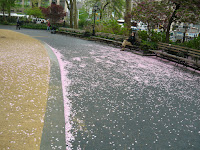 Some months later, back home, I was looking through Marcella Hazan’s “More Classic Italian Cooking,” and saw a recipe for Smothered Green Cabbage, Venetian Style. It was fall, and I wanted some cabbage. It called for very thinly sliced cabbage sauteed with some chopped onion and garlic in a quantity of oil and a dash of wine vinegar, and then cooked very slowly for a long time, an hour to an hour and a half, stirring every 10-15 minutes to mix in the caramelized bits. When I ate it, it brought back the taste of the “steamed cabbage” at Kispipa. I’m thinking the only difference might have been the fat, goose or chicken fat in the Hungarian restaurant, olive oil in the Italian dish. I’ve made this cabbage many times since, and I always slice by hand, since I find that meditative.
And a few more notes about that Hungarian dinner. It started with sour cherry soup, covered with dollops of whipped cream. And for my coffee, I asked for cream, which puzzled the waiter until he brought me—a bowl of whipped cream.

The other day I went to a genealogy workshop at the Municipal Archives, where I learned what birth, death, and marriage information is available for New York City. I had the marriage certificate for one set of grandparents, but I was also able to find the marriage license, which included information about names and birthplaces of my grandparents' parents. My grandfather's parents were both born in the same city he was born, Vitebsk, in what's now Belarus. My grandmother's mother, however, was born in Vilno aka Vilnius, in what was Russia then and now is Lithuania. Since my grandmother and her father were both born in Lodz, then Russia, now Poland, I wish there were some way of finding out how my great-grandmother got from Vilno to Lodz—did her family move from Vilno to Lodz? or did my great-grandfather travel to Vilno and meet her there? I have no idea what he did for a living, but I know he died before my grandmother and her mother came to the United States.
Also of interest is that a city alderman (the equivalent of a city councilman today) was the person who married them. Does this indicate a certain kind of status for my grandfather or grandmother? Or had they done some sort of service that generated a certain amount of goodwill on the part of the alderman, Herman Bauler? Was he from their part of the world?
When I looked up my other grandparents’ marriage certificate and license, I found more baffling information. There were actually two sets of licenses and certificates. On March 28, 1917, my grandparents were married at City Hall by a city clerk, with a witness whose name, Thomas Douglas, makes me think he was someone at City Hall, not someone my grandparents knew. But then, on May 25, 1917, there’s another license and certificate stating that Joseph S. Somerstein, a “reverend” (not a rabbi), married my grandparents at 611 East 6th Street, with two witnesses, Abraham Blaustein and Abraham Sternthal, whose names suggest they were friends of either grandfather or grandmother.
Why two weddings? One of the women working at the archives had this thought: one set of parents didn’t think a marriage at City Hall was a real marriage and they needed to be married in a religious ceremony. But why a “reverend”? Was Somerstein really a Christian minister or did the clerk filling out the certificate not want to write “rabbi”? Or was this a little dig by my grandfather, who I’m pretty sure by this time had become an atheist, so it didn’t matter to him what religion he was married in? (As a union organizer, he once told me, he would sit outside of workplaces and eat a ham sandwich; since God didn’t strike him dead for eating traif, this was supposed to show that the union wasn’t against God.)
Posted by Red Emma at 4/13/2019 10:37:00 PM No comments:

I’ve been a copy editor most of my working life, at book publishers, the Village Voice, and Publishers Weekly, and for many years teaching copy editing at NYU’s journalism program. When I first started teaching I had come across an editorial in the New York Times on the topic of “like” vs. “such as.”

Older readers may remember a TV ad for Winston cigarettes featuring the line, “Winston tastes good, like a cigarette should.” This is generally considered ungrammatical (“like” should be “as” in this case), and the ad was widely ridiculed at the time. But a side effect was to make some writers leery of using “like” in any comparative form at all. And some grammarians encouraged them in their fear. The result was the proliferation of “such as” in such sentences as “The reading list for Freshman English included classics such as Moby Dick, The Scarlet Letter, and The Red Badge of Courage.”
Maybe this reads okay to you, but that “such as” is clunky to me. It could be split: “...such classics as...” Or it could be replaced by one word, “like.”
Where I am free-lance copy editing now, there is a proliferation of “such as.” It’s as though all the editors at this magazine were taught by English teachers who’d been spooked. So today, I went to the basement, where I have all my teaching files, and found the clipping of the 1985 New York Times editorial on the subject. I e-mailed the top editors at the magazine I free-lance for and made my pitch to change some of those “such as”s to “like.” I await their verdict.

Yesterday I needed a book for my book group, and it was available at a bookstore on Columbus Avenue. I had a podiatrist appointment about a mile away, so I decided to walk. After I got my book, I walked around the corner to 82nd Street, where Jack and I lived our first three years in New York. Our second apartment was at 134 West 82nd, a (very cheaply) renovated building—there were large gaps between the baseboards and the floor in places. We had mice. I got a cat from a “cat lady” (she had many in an apartment in Hell’s Kitchen), who turned out to be sick and we returned him. (Our cat-loving friends now would probably berate us for not taking him to the vet to cure him, but we were both working, and young, and careless.) An apartment in this building recently sold for three-quarters of a million dollars. 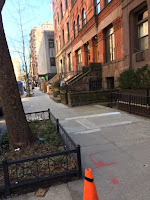 The bookstore is in a building, the Endicott, https://en.wikipedia.org/wiki/Endicott_Hotelthat has now returned to its original status, then at the turn of the 20th century a luxury “hotel,” now a luxury co-op, but when we lived at 134, it was an SRO (single room occupancy), aka
welfare hotel. At night we sometimes heard screaming. The original Endicott had a glass-roofed Palm Court, and in that same space a series of restaurants in modern times; when we lived there, the space often held local CORE meetings. In photo to the right, the gray building in the background is now a police precinct, but when we lived there, it was a city-owned vacant lot; when it snowed, the city never cleared the sidewalk, and after several months of snow and melting snow, the pavement was broken in many places.