Grandpa Sam Leibowitz came to the United States at 16, in 1907, the year of the greatest immigration to the U.S. in the 20th century. His older sister, Rose, had come a year earlier, and his next younger sister, Lena, came the following year. And in 1910, his widowed mother, with three of her four youngest children arrived, just in time to be counted in the 1910 census. (I questioned a genealogy librarian about what might have been the reason Max, then 14, might
not have come with his mother and siblings, she thought it was just a mistake. Since the mother, my great-grandmother, most likely didn’t know English, a neighbor must have answered the census taker’s questions, and since the family were new arrivals, the neighbor might not have known how many children were actually in the family. But in the 1920 census, it’s confirmed; Max came to the States two years later, in 1912. So what was that about? Was there some apprentice-type program he was in until the age of 16? Was he going to a yeshiva? All the relatives who might have known are long dead.)

Sam’s mother was illiterate and very superstitious, according to my mother. When she clipped her fingernails, she burned the clippings, to prevent their being used against her. And she never learned English. Her youngest daughter died at 13, according to one story one board the ship bringing the family to the U.S., but her death date doesn’t accord with census records.
Sam was from the same town as my grandmother, Liz, but they met in New York. My impression is that they met at the landsman restaurant her parents ran, but Jack remembers hearing some story that they met at a union rally outside the Winter Garden Theater. However, they met, they married in 1917, and my mother was born a year later.
I don’t know how Sam came to work in the fur industry, but in his work he also became a union organizer. He remembered students coming to the estate, where his father had been an overseer, from the big cities after the 1905 revolution in Russia to talk about the revolution. He had a draft card that noted he was working for the Fur and Leather Workers Union in 1917 and 1918. I don’t know how soon after the Bolshevik Revolution he joined the American Communist Party, but he was definitely in the Party because after the Taft-Hartley Act was passed in 1947, there were many conversations at the dining table about what he was going to do about its anti-Communist affidavit. But I’m getting ahead of myself here. 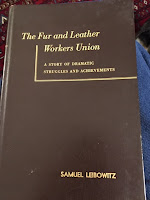 Through much of the 1920s, Sam worked and organized, and his family moved, sometimes every year. There was an oversupply of apartments, so landlords offered a month’s free rent, which was an incentive for working people to change apartments. Sometime in the late 1920s, however, he was blacklisted and couldn’t get work at all. So he moved the family, first to Washington, D.C., where he or Liz, my grandmother, must have known people, then to Richmond, Virginia. At first he tried to do fur repair work, but Richmond was not a place where furs were much worn—it just didn’t get that cold. So he and Liz ran a grocery store in a poor neighborhood, near the street-car depot. But he kept in touch with his comrades back in New York, and when WWII started and now Soviet Russia was an ally, he was called back to New York to work at the union office. Where he worked until that question of the anti-Communist daffidavit came up. (I wrote about this in my red-diaper baby memoir.) His friend,
Ben Gold, was president of the union and wanted to fight the affidavit, but Sam said he’d had enough fighting, he was ready to retire. Which he did, spending the rest of his life reading and painting, and when they moved to Florida in their 70s, he worked at the University of Miami bookstore. Meanwhile, Granny Liz went to work at Macy’s, in the lingerie department, until they moved to Florida. She once gave me a leopard-skin-patterned bra. But, she said, I should wear something with a little padding—not what I wanted to do in 1962.

They took me to see my first movie, “Little Women,” at Radio City Music Hall, at Christmas. Granny was my little sister’s protector in any dispute among us children. Grandpa talked to us like we were grownups; when he asked what we were doing, it sounded like he really wanted to know. He was very mild-mannered, not dogmatic in his ideas.
Granny was a classic worrywart. After a visit with them in Brooklyn, we had to call her collect once we got home so she would know we were home safe. She worked at Macy’s in the lingerie department. When they visited us when we were still children, she gave us backrubs before we went to sleep, and each of us wanted her to stay with us the longest. And she cooked. She made knishes unlike any knish I’ve seen since, with a pastry she stretched so thin it hung over the edge of the table and was translucent. It was more like a potato and onion strudel.
They were not at all religious. In retrospect, I think our spring visits to them in Brooklyn must have been around Passover, and the dinner she served was a seder. But it was never called that. There was a little booklet on the coffee-table, from Manischevitz, in English and Hebrew, about Passover, but we never did the ceremony, never asked the questions, never talked about bitter herbs. Now, in my 70s, when I hear my friends talk about the seders they've been to or hosted through their lives, I’m sorry I missed all that. But it just didn't exist in my family as a tradition.
I never really talked to Grandpa Sam about politics. But I remember late in his life, he went back to the Soviet Union with his second wife (Liz had died of an abdominal cancer in her early 70s), Gussie, even more political than he was. He told us about flying to Riga from Moscow, where Gussie had relatives, and mentioned that they didn’t get any meal on a three-hour flight. Gussie got very defensive at what she took to be a slam against the Communist Motherland, and Sam said, mildly, “Gussie, I’m not criticizing the Soviet Union. I just think it would have been nice to have a bite to eat.”
My mother had lots of cousins from Sam’s family, but while my mother may have kept in touch with some of them, they were never part of the family I grew up in. I’ve met a few since, but it’s hard to maintain contact with family who are otherwise strangers.
--------------------------------------------------------------------------------------
Over on Facebook, there is a page called #52Essays Next Wave, moderated by the incomparable Stacie Evans. Join us there, to write, to read, to comment helpfully...