I’ve kept all of my date books since I started using one in 1963. So while I remember this meeting and the change it made in me, I wouldn’t have remembered the exact date or what else I was doing around the same time without this one. 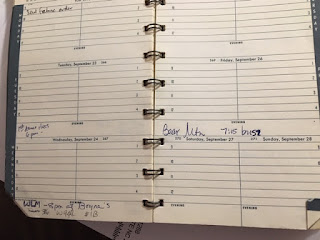 Fifty years ago tonight, I went to my first women’s liberation meeting. It was at the apartment of a reporter for the New York Post, where my husband worked, and if I hadn’t been there recently for a party I think I wouldn’t have had the courage to go to this meeting where I knew practically no one.
The meeting was of the “women’s caucus” of the New York Media Project, a group of media professionals who were against the war in Vietnam. In 1969 “women’s caucuses” were cropping up in many groups like this. I had been working for a book publisher, as a secretary, for just a month, and had heard of the Media Project, but wasn’t yet part of it. But in my work at the publisher, I had just finished reading a “manuscript” (a box of ephemera: leaflets, flyers, papers) of Women’s Liberation Movement documents, and felt what journalist Jane O’Reilly later called, in the first issue of Ms. magazine, “the click experience,” when myriad inchoate feelings and thoughts about my life as a female all clicked into place.
I asked my husband (yes, my husband!) if he knew anyone at the Post who was involved in this WLM, and he told me about Lindsy Van Gelder and Bryna Taubman. And he added that they were having a meeting on September 24.
Reader, I went. And in a roomful of mostly strangers, I spoke up during the discussion. I had never done that. But these were all women, and women who were encouraging each other.

Up to this moment I had always felt that men were absolutely sure of what they thought, and because I was rarely absolutely sure of what I thought, I didn’t dare open my mouth for fear of being shot down. But these women were saying some things I agreed with, and some I didn’t. It felt possible to speak up in support of one side or another without having to prove I was 100% right.
That was the beginning of my leap into women’s liberation and feminism, and I have never looked back. It has saved my sanity.
(And the one bittersweet thought now is that my husband isn’t here to have several long discussions about those early days, and how we rockily yet successfully navigated our life together as many other relationships failed to do.)
-------------------------------------
It’s Slice of Life Tuesday over at Two Writing Teachers. Check out this encouraging and enthusiastic writing community and their slices of life every Tuesday. And add one of your own.

Labels: apartment living, fiction, slice of life, what is home

It’s been more than three and a half years since my husband died, yet I still often find it hard to get out of bed in the morning and get started on my day. A few days ago, I posted this on my Facebook page:

What is my purpose in life? This is not a question I ever think about, it seems to have religious overtones. Yet I think it may have some psychological relevance because I sometimes still have trouble getting out of bed in the morning. Jack is a handy hook to hang my purpose on. When he was alive, perhaps I felt my “purpose” was to live with him, do things we enjoyed together, and do other things separately and report back to each other. Like, my “purpose” was to have another person always available to talk to, to talk at, to bounce off of, even to argue and fight with, and, as time passed, to have a history with. That purpose is gone, and I am still somewhat flailing about, trying to get at “why” I want to do the things I “want” to do. There’s a lot here to unpack.”

Several friends helpfully gave me the usual suggestions: volunteer, help others, find the projects I couldn’t do when married. Reading them, however, I realized the real underlying problem, something I've been aware of for many years. It's not purpose, it's self-motivation. It's setting my own goals, and then actually, really following through on them. I'm fine at meeting other people's deadlines or needs, but have been lousy at bridging the distance between idea/thought/desire and action. My husband was, in a way, an external goal, which I either met or struggled, often successfully, against. Now, it’s just me. It’s my own motivation. I have to learn how to pay attention to it and to use it.
-------------------------------------
It’s Slice of Life Tuesday over at Two Writing Teachers. Check out this encouraging and enthusiastic writing community and their slices of life every Tuesday. And add one of your own.
Posted by Red Emma at 9/03/2019 09:01:00 PM 2 comments: