My Life in 50 Objects, 8: Enameled Cast Iron from Vermont 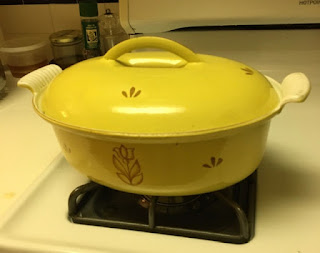 This oval Dutch oven (or cocotte) looks like Le Creuset, but it is literally from a Dutch company, DRU. This pot belonged to my Aunt Nita, and I took it from her kitchen after she died in 1997. I wonder whether she brought it from their seven-year sojourn in Paris in the 1950s, or one of her many trips back over the years. I don't remember any particular dish she made in this pot, just that it was lovely and substantial, and it fits my kitchen's color scheme.


The internet tells me the company was founded in 1754 as a blast furnace making cast iron products, though it now concentrates on gas-fired heating and wood-burning ovens. Its enameled cast-iron cookware is now sold as “mid-century vintage” at websites like Olde Kitchen and etsy; it’s much cheaper than Le Creuset, but seems just as sturdy and long-lasting.

I don’t use this pot often because its shape seems most suited to roasting a chicken, and its surface area isn’t as big as a round Dutch oven would be—I think. But I did use it last night to sauté four chicken thighs, then sautéed onions and mushrooms, and braised it all together—really delicious. And I have a deep round Le Creuset covered skillet, which is my kitchen workhorse. I think I should start using the DRU pot more often.