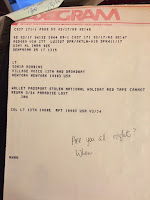 Today’s slice of life is something that happened many years ago, March 1980, to be exact.
At the time I was copy chief at the Village Voice, in charge of three copy editors, a legal researcher, and six proofreaders. One of the proofreaders had gone on an extended vacation to Indonesia. On March 17, I got this telegram from her: “Wallet passport stolen national holiday red tape cannot return 3/24 paradise lost.”
A few days later I got an air letter (remember those?) with more detail. She was on Bali, it was the Balinese New Year. She was hoping to get to Jakarta, where the American embassy was, but with no money, and no American Express office on Bali, it might be difficult. (Her letter noted that the airport she was sitting in kept playing a loop of Jimmy Cliff’s “Sitting in Limbo.”)
A couple of weeks passed, and I heard nothing more. Was she all right? Had she managed to get to Jakarta? Was she still sitting in limbo? How to find out?
In the days before e-mail and cellphones, I turned to the traditional. I called the State Departent. Explained the facts about my employee, and asked whether there was any way they could find her.
Indeed, there was. I forget how it was done, but they found her on a beach. Got her a new passport, got her on a plane, and she was back in New York by early April. What an adventure, both for her and for me. I did feel like a mother hen, but what if she really had disappeared?

I am turning into an irascible old lady. Today was the Bank Street School for Children's Fall Fair. When my daughter went to this school, its fall and spring fairs were held inside, in the lobby, the auditorium, and I think also in the cafeteria space, maybe some classrooms as well. For maybe the past 20 years, the fairs have expanded outside, with one of those blow-up slide/trampoline things in the middle of the street and various activities and food items for sale at tables on the sidewalk. A few years ago, they set up a small stage, on the sidewalk in front of the school, with a singer.
I should add that I live next door to the school. Even as the fairs moved outside, it was still possible to walk up the street unimpeded except by running small children. Today, however, things got exponentially worse.
First, a stage with band was set up in the middle of the street, with about 10 rows of folding chairs for the audience. Okay, the music was loud, but I could live with that. But when I went out, it became obvious that i couldn't walk up to Broadway on my side of the street -- it was completely blocked by some kind of setup, which I didn't pay attention to. I crossed the street.
At one point, near a tree that narrowed the sidewalk considerably, were 3 or 4 adults, hanging out. As I approached, a woman with a baby in a front sling joined these adults, effectively blocking the sidewalk (I was pulling a wheelie so I needed a little bit more room) and apparently not noticing that someone was trying to get by.
I may or may not have said "excuse me" first, but I did say, "You're blocking the sidewalk." She said, "It's the school fair." I said, "There are people who live on this block." She said, "It's just for today." I didn't have time to continue this back-and-forth of rudeness. If the school had put up signs saying they were going to taking over the street and sidewalk, at least I'd have been prepared. But this is just more private enterprises taking over public spaces, and the public be damned.
(Blogger isn't letting me insert the Slice of Life image. Don't know why.)
Posted by Red Emma at 10/17/2017 11:25:00 PM 1 comment:

I had such hopes for this year. I’d write every week for Vanessa’s 52 Essays in 2017. I’d write every Tuesday for the Two Writing Teachers’ Slice of Life Tuesdays and daily for their March Slice of Life Daily Challenge. I’d write every day in April for the Blogging AtoZ Challenge.
Well, I have no discipline. I got through Week 7 for the essays. I missed only four days in March (posting twice a few days when I missed the actual dailiness). I wrote 10 blog posts for the blogging challenge, but posted only seven. I have managed 20 of the Tuesday slices of life, which is half the number of weeks so far. So Slices of Life get most of my attention—or maybe just what I’m in the habit of doing; this is my third year on that project.
But I’m going to try to get back into the essay challenge. Only 11 weeks left in the year, so unless I write four essays a week from now to the end of the year, I’ll never catch up. But writing is better than not writing. Writing always tells me what I think. I often don’t know otherwise, or don’t remember. If I don’t write it down, I can’t remember it.
This has always been the case with my brain. Tell me something, and really, it does go in one ear and out the other. I might remember a conversation being interesting, or fascinating, or boring, or annoying, but the details of why are lost in fog. Unless I write them down.
Many years ago I saw someone on a subway platform wearing a T-shirt that read: “Writing is thinking, not thinking written down.” I want that T-shirt.
(Is this an essay? It is because I say it is.)#52essays2017
Posted by Red Emma at 10/11/2017 10:37:00 PM No comments:

I love Flax brand clothing. Their linen pants and jackets are my summer wardrobe. And oddly, there seems to be only one store in Manhattan that reliably carries their stock. So, when my white pants wore out in the seat a couple of months ago, I went online to see where I could buy a replacement.
I found a store in Charlottesville, Virginia. (This was before the white supremacist rally.) Ordered two pair via the Web site (so I’d have an instant replacement if/when my replacement pair wore out), had a problem about the size, called and talked to a human being, who easily fixed the problem—and I got my pants in a couple of days.
A week later, after the horror of the white supremacists and the death of Heather Heyer, I e-mailed the store to ask if they were all okay, and they replied that they were. I felt I had a connection to this city I’ve never been to, just because I’d bought something over the Internet.
A couple of weeks ago, my black Flax pants wore out. I couldn’t remember the style of pants I’d ordered in August, so I called the store. The woman who answered was in the midst of trying on a pair of pants for another caller, so she asked me to hold. But she continued to talk, and we chatted some about how when you’ve asked someone to hold, you feel compelled to keep talking so the other person knows you are still there, even as you are doing something else.

When she looked up my previous order and saw I lived on Riverside Drive in New York City, she said, “Oh, I grew up at 98th and Riverside.” She added, “I went to Ethical Culture and Fieldston” (two private schools), so I added, “My daughter went to Bank Street and Columbia Prep.” Some more chat about the weather and that the windy side streets off of Riverside Drive had sent her mother out of the city.
It wasn’t a true small world story; we didn’t talk long enough to find out whether we knew any people in common. She did have to get back to her work selling clothes. But it was still a human connection, over many hundreds of miles.
-------------------------------------
It’s Slice of Life Tuesday over at Two Writing Teachers. Check out this encouraging and enthusiastic writing community and their slices of life every Tuesday. And add one of your own.