A couple of weeks ago I went to a movie theater for the first time in a year and a half, to see Lin-Manuel Miranda’s “In the Heights.” The city street scenes were great, but I don’t know that neighborhood so well, and mentioned to a friend who lives in Washington Heights that there should be walking tours of sites associated with the film. She immediately volunteered to take me on one, and that’s what we did yesterday. 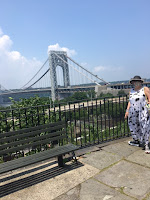 If you haven’t seen the movie yet, I won’t say too much about the plot. But here are three scenes. The first is in the J. Hood Wright Park (a rich man who had a mansion on this site) where Benny and Nina, the secondary couple, sing a duet. This part is set on top of Manhattan’s bedrock and looks toward the George Washington Bridge, which BTW is the world’s busiest bridge: it carried more than 103 million vehicles, many trucks, in 2016 (latest figure on wikipedia). On the New York side it connects to the Cross Bronx Expressway, which I have heard long-haul truck drivers call the worst highway in the country; having driven it myself, I would agree. 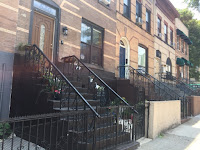 Next is a row of three-story houses on West 176th Street, very much like private homes in Greenwich Village much further downtown. Judging from the mailboxes, it looks like they have been converted to one apartment per floor. In the movie, people are sitting outside on the steps and Nina dances down the street, singing of her love for her neighborhood. 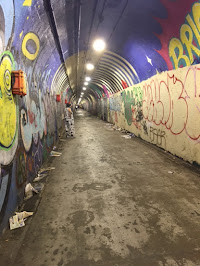 This location I didn’t think really existed. It’s part of Usnavi’s song and dance to honor his Abuela Claudia (Usnavi is the Lin-Manuel character). But it is real: the tunnel leads from Broadway under the hills of Washington Heights (it’s called “the Heights” for a reason) to the #1 subway train. The graffiti is still being worked on — one man was adding finishing touches of red to one part — and from all the paper and cardboard near the walls, I suspect that people sleep there at night.

I will definitely watch the movie again — it’s available on Hulu — now that I can see outside the frame of the camera.

It’s Slice of Life Tuesday over at Two Writing Teachers. Check out this encouraging and enthusiastic writing community and their slices of life every Tuesday. Add one of your own.