I save too much stuff. Mostly, I save papers and/or objects because I have a project in mind. Sometimes, though, it’s pure sentimentality. Here’s one from the latter category.

In the mid-1970s, a company offered to families a cute way to save small children’s artwork; paper on the refrigerator door doesn’t last that long. This company sent some sort of specially treated paper the child would draw on; parents then sent the paper back to the company, which fused the drawing onto a Texas Ware melamine plate, which then became the child’s own dinner plate.

I no longer remember whether I found out about this or it was something my mother or aunt sent us. So I had my then maybe four-year-old daughter do three of these plates, and this is the last one I have. I offered it to my now 50-year-old daughter whether she wanted it, and she said no. (She has little sentimentality.) Since she has no kids herself, there’s no one in the direct family who’d have any interest in it. 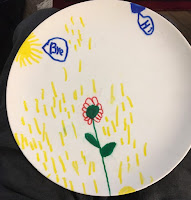 So I am now free/required/forced to throw it away. Here's the plate. If anyone reads this and might have some sort of use for it, speak now and I’ll mail it to you.