My Life in 50 Objects, 7: Lenin, with Accessories 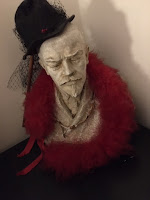 Lenin’s bust is something else I took from Grandpa Sam’s apartment after he died. I never knew he had this, so never asked him when he got it and what he thought about Lenin. I wonder if it belonged to his second wife, Gussie Linn, who was much more of a Communist than he was. After they returned from their trip to the U.S.S.R. in 1972, he told us about flying to Riga to visit Gussie’s relatives. He mentioned that the flight was a bit over a couple of hours and the passengers were only given some candy. Gussie immediately protested that the flight wasn’t that long. Sam replied mildly, “I’m not criticizing the Soviet Union.”
The hat and the boa had nothing to do with Sam. The hat was part of a gift for my 50th birthday party from Meredith Bernstein, a literary agent and college friend of Ricki Levitt, who was a student of my old friend Gerald when he was TA’ing at the University of Rochester in the 1960s. The boa? This was from some recent party, I think—events in the past 10-15 years are, oddly, less sharp in my memory.
-------------------------------------
It’s Slice of Life Tuesday over at Two Writing Teachers. Check out this encouraging and enthusiastic writing community and their slices of life every Tuesday. And add one of your own.