SOLTuesday: My Life in 50 Objects, part 5

Both of these two things belonged to my grandfather Sam Leibowitz, and they seem to show opposite sides of his interest. I wish I had been able to ask him how these fit together. 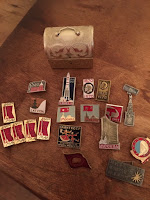 I wasn’t surprised by all the Soviet pins, though I don’t know whether he got all of them in his one trip to the Soviet Union in 1971 (when he left home to come to the U.S. in 1906 it was still Russia), or whether he got some of them earlier. Five identical pins say “Mir” (or Peace) on top, “Mai” (May?) on the bottom. Two pins celebrate the centennial of Lenin’s birth (1870-1970). A few are simply about Moscow, and then there is a pin for Latvia, and another for Riga, the Latvian capital. Sam went to the Soviet Union with his second wife, who came originally from Riga, and she still had relatives living there.
I knew Sam had been a member of the CPUSA. In the late 1940s, he was forced to take early retirement from the Fur and Leather Workers Union because he wouldn’t sign the anti-Communist affidavit that the new Taft-Hartley Act required of union officers. But I never had any conversations with him about his politics. And he was not at all like anyone’s stereotypes of a Communist. 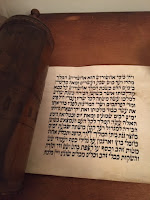 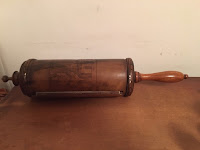 But this next object? I didn’t know about this until after he died, at 82. It’s a scroll, in Hebrew, and my mother told me it was the Book of Esther. This is the Old Testament story celebrated by the holiday of Purim. I’ve always liked this story since it has a female hero. But why did Sam have it? What did it mean for him? How did he acquire it? I know that religion meant little to him. One of his early union organizing tactics was to sit outside a workplace and eat a ham sandwich, very not kosher, to show the Jewish workers that God wouldn’t strike him dead, either for eating the ham sandwich or talking about the benefits of a union. Was this a gift from mother? and inheritance from his father? or from his in-laws?
The never-ending and never-to-be-answered questions.
-------------------------------------
It’s Slice of Life Tuesday over at Two Writing Teachers. Check out this encouraging and enthusiastic writing community and their slices of life every Tuesday. And add one of your own.