SOL18: Where Do Memories Belong? 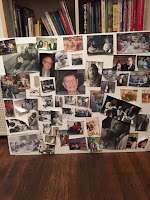 For about a year after Jack’s memorial, this photo board was in the living room, across from where I sat, in his chair. I would see it every day, and it was almost (almost!) as if he was still here. It was also an occasion for people who came over to talk about him, if they wanted to. I always wanted to.
After a year, I thought, maybe it was too much, to leave it where I would see it whenever I looked up from whatever I was doing, on the computer, reading a book, watching a baseball game (the photo board was right next to the television). So I moved it into the bedroom. That was also more appropriate, considering how much enjoyable time we spent in bed over the decades.
In the bedroom, it stands in

front of a cabinet holding linens. So I have to move it once a week when I change towels and sheets. Yesterday, when I moved the board, I was pricked by irritation. This should not be the way Jack still exists in this world, pinned to a board in bits and pieces. It felt wrong that he is dead. Yet that is still a fact.