...which was last Thursday this year, or was it a week ago Wednesday, when Seattle beat Oakland in two official games—in Japan.

The baseball season used to start on Monday, the first day of the week. Then ESPN came along, with its Sunday Night Baseball, and two teams would start their season the night before traditional Opening Day. And this day would be in April, unless it was in late March, when it was more likely to snow.
(Doing a bit of Google research, I learn that Opening Day was in Japan, on a Wednesday, seven years ago. In 2014 Opening Day was in Australia, but I don’t think we were paying too much attention that day as Jack was still in rehab at the nursing home. And in 1968, Opening Day was on a Wednesday because Martin Luther King Jr. had been assassinated the week before, and all sporting events were, along with others, postponed until after the funeral, on April 9. In fact, April 10 was the first time all Major League Teams started their season on the same day.) 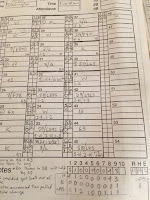 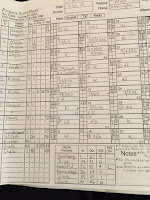 I like to score games when I watch, but I couldn’t watch the Mets’ Opening Day on Thursday because I had work to do. Today, however, I sat in front of the TV for the whole game, keeping score by a system devised by Bill James that is too complicated to describe here, but allows for keeping track of balls and strikes and makes it much easier to see who gets the RBIs. Here’s what it looks like. And hurrah, the Mets won, although they made it look harder than it should have.
-------------------------------------
I’m participating in the 12th annual Slice of Life Challenge over at Two Writing Teachers. This is day 1 of the 31-day challenge.  It’s not too late to make space for daily writing in a community that is encouraging, enthusiastic, and eager to read what you have to slice about.  Join in!