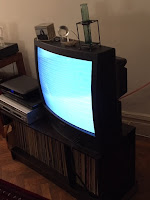 Last night I turned on my television, and while there was audio, there was no video. This photo doesn’t really show what I see, which is gray and white stripes across the screen. (Why is it so hard to photograph a TV screen?) I’ve had this TV for more than 20 years, and it is the old-style, picture-tube type.
Now I’ve been thinking for years about getting a flat-screen TV, but even a relatively small 32-inch would require a new table, which means I need to find someplace to put the cable box and DVD player, as well as the device that also plays VHS tapes, which I still have quite a few of. Not to mention all those vinyl records. So I’ve put it off and put it off and put it off.
When I couldn’t get any video, I of course called my cable provider right away. (We’ve always had cable because our apartment building is in a poor reception area.) After rebooting the cable box, the agent I spoke with said I needed a tech to come look at my system—and I was able to get an appointment this afternoon.
The tech actually arrived at the beginning of my appointment window (amazing!) and unplugged the cable from the TV. The screen remained the same—which told the tech that the problem is in my TV, which means it must be replaced. I can no longer put this action off. I have to get a new TV. Stay tuned...
-------------------------------------
I’m participating in the 13th annual Slice of Life Challenge over at Two Writing Teachers. This is day 1 of the 31-day challenge.  It’s not too late to make space for daily writing in a community that is encouraging, enthusiastic, and eager to read what you have to slice about.  Join in!